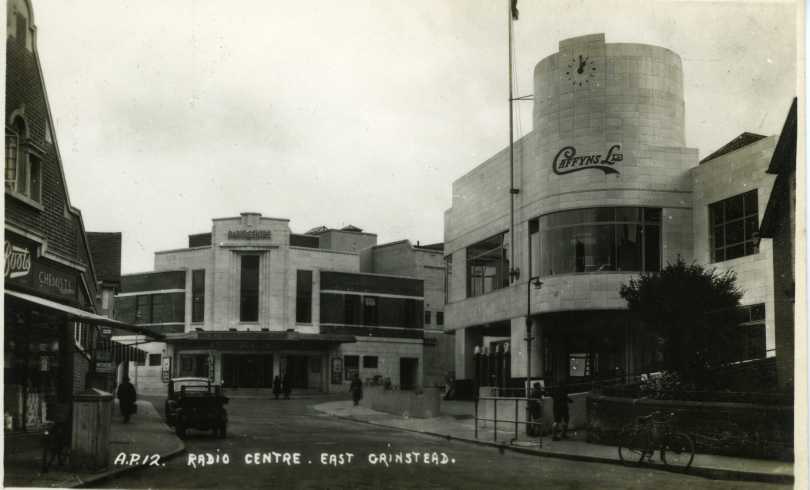 I must start by apologising about last month’s article. The first paragraph suggested that I was including O, P and Q. In the end I decided to concentrate on O and P, and leave Q for this month, along with R.

The word “Queen” features in four places in the town, Queens Road, Queens Walk, Queens Hall and, of course, the Queen Victoria Hospital. The first name for Queens Road was Cemetery Road, which the residents living there, did not appreciate. They took advantage of the euphoria surrounding Queen Victoria’s Golden Jubilee in 1887, to unofficially call it Queens Road. This name was eventually agreed to by the authorities, and it became official. Thirteen years later, in the month that the Queen died, January 1901, the, then, cottage hospital was moving into its new premises in Queens Road. The hospital board decided to include Queen Victoria into its name. During WWII, the “cottage” was dropped as it was felt that it was no longer appropriate for, what had become a centre of excellence in the whole country.

The third use of the word was in Queens Hall, the name adopted by the working men’s club for their new building. The project had been started to commemorate Victoria’s Diamond Jubilee in 1887. It was demolished in 2007. The money from the sale of the site, was invested and as the Common Good, gives small grants annually to local groups. Queens Walk is, of course, much more recent, being completed in 1974.

The name Quabrook, appears early in the C12th. According to Michael Leppard’s book, “A History of East Grinstead”, it was the name for a crossing at a boggy place. In this instance, it is a small bridge, south of Forest Row, just off the Hartfield Road, at the start of a track leading past Broadstone Farm to emerge almost opposite the Ashdown Forest Hotel. A small school was run there in a nearby cottage by a husband and wife. There were hooks in the ceiling, from which small boys were punished by suspending them by their belts! Maintenance of the bridge was taken over by the Turnpike Trust in 1815. 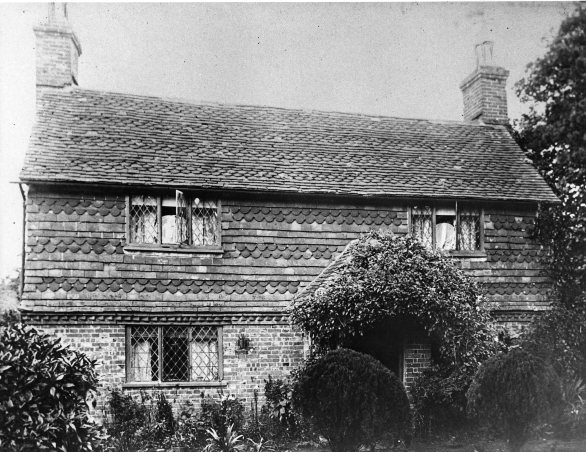 Quakers formed a small group in the mid C20th and in 1957 were able to open their own meeting room at 57, Railway Approach. They closed only ten years later 1967, due to lack of support.

The Rice family were prominent in the town for more than one hundred years. Rice’s Hill, the very steep public right of way, which leads from the London Road to Cantelupe Road, was named after them because it was the route between their businesses in town and their private house. During WWI, they manufactured explosive shells. Joseph Rice was life-long teetotaller and made many charitable donations. In the severe winter of 1895, he gave a hundred loaves for distribution to the poor. His son, also Joseph was one of the first to campaign for a new cottage hospital in the 1930s, when the town had outgrown the building in Queens Road. He organised a petition to start a fund to build a bigger hospital, and dedicated his retirement years to driving the project forward.

The Radio Centre was the name chosen by the developers of the Art Deco cinema which formed the pivot of the estate built by Christopher and King in the early 1930s. It opened in 1936 and became a very important part of the life of the town. Showing films, was, of course, its prime function, but it also displayed various items of interest from time to time, in its glamorous foyer. An unexploded bomb, from Hoskyns Farm was on show there, after it has been made safe by the Bomb Squad, for example. On VE Day, May 8th 1945, people danced on the streets into the night, to music emanating from its doors. It was taken over by Classic Cinemas in 1966 and renovated with three screens. Sadly, it was demolished in 1989 to make way for the Atrium.

Dr John Henry Rogers was local doctor who ran a free dispensary in the town from the early 1850s. He then opened only the fourth cottage hospital in England, at his own expense in Green Hedges Avenue. He closed it because of lack of support from the wealthier residents but eventually it was reopened by others in 1881, and, of course, is the foundation of the QVH. Dr Rogers was also an Assistant Warden of Sackville College, who fell out with Rev John Mason Neale. He tried, unsuccessfully, to have Neale removed as warden.

East Grinstead, once a thriving staging post for travellers between London and Brighton, was eclipsed when the railway line through Three Bridges, opened. Local gentry sought to overcome this problem by suggesting a branch line from East Grinstead to link with the main line at Three Bridges. Their plans came to fruition in 1855, when the first train came though on July 8th. The occasion was greeted with great enthusiasm in the town and celebrations took place throughout the day and night. It is ironic that another prominent resident, Dr Beeching, declared the line redundant in 1965. A decision which is still regretted in many locations, to this day. He is remembered in the name of the slip road, which follows the route of the disused St Margarets Loop. Called Beeching Way, I suggested, at the time, that it should be called the Beeching Cut. This was thought to be disrespectful to his memory. Although, now it is thought by many to have been the wrong decision, Beeching genuinely believed it was the only way to secure the future of our railway system. Hindsight is a wonderful thing! 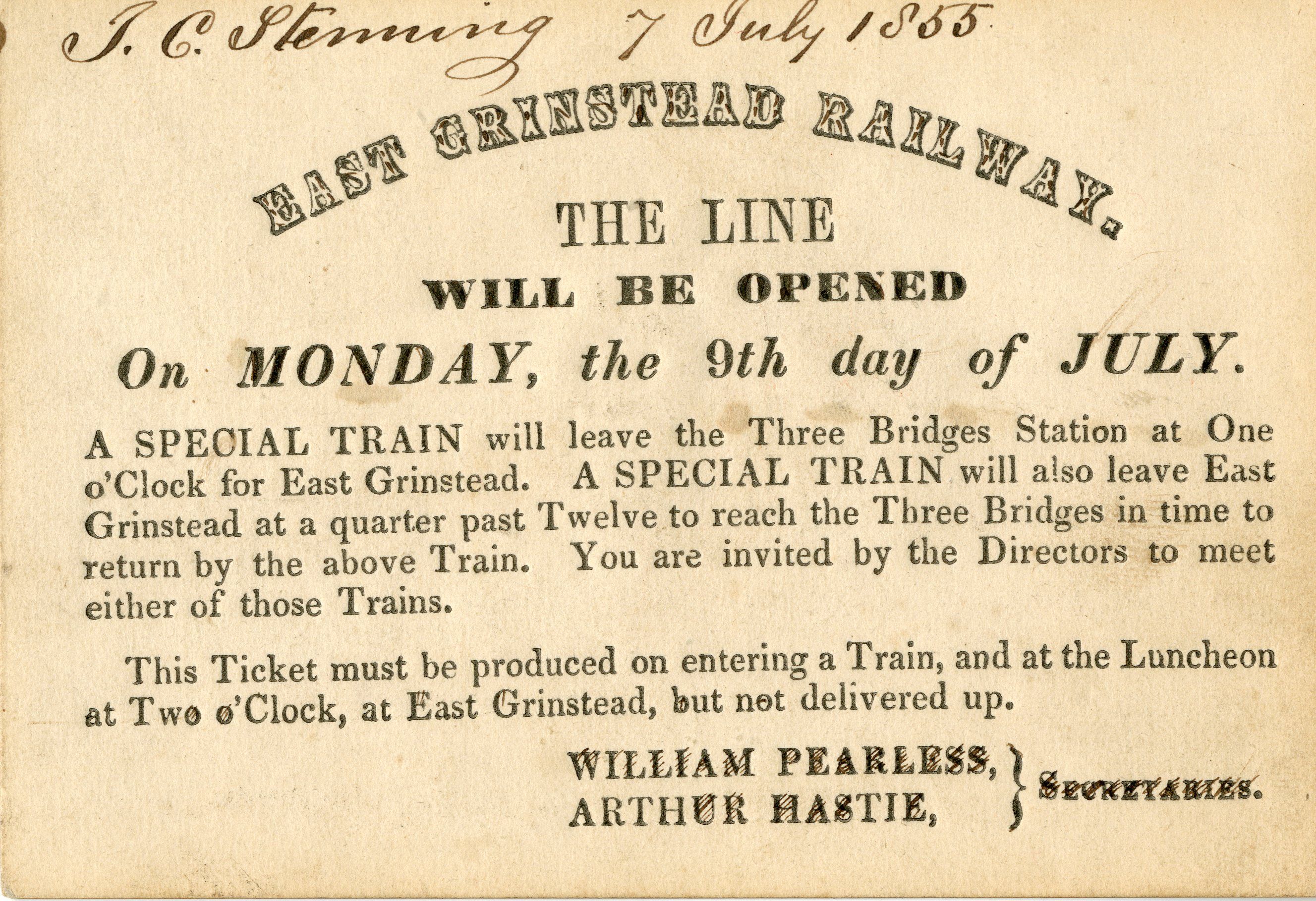